A phenomenon that is well known from chaos theory was observed in a material for the first time ever, by scientists from the University of Groningen, the Netherlands. A structural transition in the ferroelastic material barium titanate, caused by an increase or decrease in temperature, resembles the periodic doubling seen in non-linear dynamical systems. This ‘spatial chaos’ in a material was first predicted in 1985 and could be used in applications such as adaptable neuromorphic electronics. The results were published in Physical Review Letters on 22 August.

A team of physicists at the University of Groningen, led by Professor of Functional Nanomaterials Beatriz Noheda, made their observation in thin films of barium titanate (BaTiO3), a ferroelastic material. Ferroic materials are characterized by their ordered structure, in shape (ferroelastic), charge (ferroelectric) or magnetic moment (ferromagnetic), for example. “These materials are always crystals in which the atoms are arranged with characteristic symmetries,” Noheda explains.

Electric or magnetic dipoles are aligned within domains in the crystals. “However, the dipoles could be pointing up or down, as both states are equivalent.” As a result, crystals of these materials will have both types of domains. The same goes for ferroelastic materials, best known for their shape memory. In this case, however, the situation is a bit more complicated, Noheda explains: “The unit cells in these crystals are elongated, which means that domains of the different unit cells do not easily match in shape. This creates an elastic strain that reduces the crystal stability.”

The crystal can improve the stability naturally by forming twins of domains, which are slightly tilted in opposite directions to relieve the stress. The result is a material in which these twinned pairs form alternating domains, with a fixed periodicity. Heating causes a phase change in the material, in which both the direction and the periodicity of the domain walls is altered. “The question was how this change takes place,” says Noheda.

Increasing the temperature increases the disorder (entropy) in the material. Thus, a tug-of-war starts between the intrinsic tendency for order and the increasing entropy. It is this process that was observed for the first time by the Groningen team, using atomic force microscopy. When heating samples from 25 °C to 70 °C, a phase change takes place, altering the position of domain walls. When the transition starts, domain walls of the new phase appear gradually and both phases exist together at intermediate temperatures (30 °C to 50 °C). “This doesn’t happen in a random way, but by repeated doubling,” says Noheda. Cooling the material reduces the periodicity of the domains by repeated halving.

“This doubling or halving is well known in non-linear dynamical systems, when they are close to the transition to chaotic behaviour,” explains Noheda, “However, it had never been observed in spatial domains, but only in time periods.” The resemblance between the behaviour of the thin films and non-linear systems suggests that the material is itself at the edge of chaos during heating. “This is an interesting observation, because it means that the response of the system is highly dependent on initial conditions. Thus, we could get very diverse responses following a small change in these conditions.”

The paper includes theoretical calculations from colleagues at Penn State University (US) and the University of Cambridge (UK), which show that the behaviour observed in the ferroelastic barium titanate is generic for ferroic materials. Thus, a ferroelectric material at the edge of chaos could give a highly diverse response over a small range of input voltages. “That is exactly what you want, to create the type of adaptable response needed for neuromorphic computing, such as reservoir computing, which benefits from non-linear systems that can produce highly diverse input-output sets.”

The paper in Physical Review Letters is a proof of principle, showing how a material can be designed to exist at the edge of chaos, where it is highly responsive. Noheda also points out how the doubling of domains creates a structure similar to the bifurcating dendrites connecting the pyramidal cells in the brain. These cells play an important role in cognitive abilities. Ultimately, ferroic materials on the edge of chaos may be used to create electronic brain-like systems for complex computing. 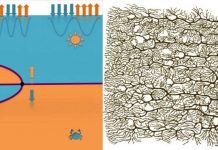 At the edge of chaos, powerful new electronics could be created

Ten shipping books we read in 2019